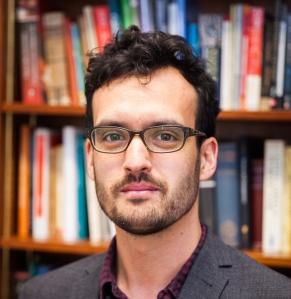 I am a lecturer in philosophy in the School of Philosophical, Anthropological, and Film Studies at the University of St. Andrews.

My research focusses on early modern rationalism – particularly the philosophy of Spinoza. My first book proposed a new interpretation of Spinoza, situating him in the context of debates over the status of philosophy and its relation to theology in the Dutch Republic.

I am writing a book on the role that hope used to play in metaphysics. Certain philosophers – notably Spinoza and the British Idealists – believed that it was a worthwhile goal to develop a picture of reality that, although of no direct practical use, could give hope and comfort to those who contemplated it. This goal is held in low regard by contemporary philosophers but not by me.

More generally I’m interested in the history of logic in this period, particularly in how logic was used for learning metaphysical truths inaccessible to the senses and for ending hostile controversies on religion, politics, etc.

I am a member of the Centre for Ethics, Philosophy, and Public Affairs and a  Research Scholar at the Global Institute for Sustainable Policy.

I appeared on the BBC World Service programme, In the Balance, to discuss the Green New Deal, with George Selgin and Ellen Brown.

I am giving a public lecture on the ethics of debt and finance at the Lit & Phil Library in Newcastle, hosted by Bigg Books.

I am doing a series of interviews on philosophy of economics with Conatus News – the material is available here.

My colleague Professor Katherine Hawley and I published a submission to a inquiry into fake news by the UK Parliament’s Culture, Media, and Sport Committee. Find all submissions here.